Earlier this week, we received an email from Master Hroar and I thought others might be interested in this peek behind the curtain.

Master Hroar is the potter behind Two Hearts Entwined Pottery, and has worked with clay as an independent potter for the past 30 years.

Now then, from Master Hroar:
I know you guys have seen the soup bowls glazed in shino before, but this time I used Dixon Clay from Arrdvarks. The results a pretty awesome, I feel. And the clay is damn interesting to throw with! 8-) 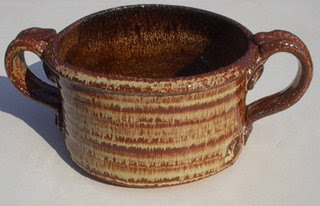 This one is in the Dixon clay, which is considered a sculptural clay. VERY course with tons of heavy grog. Which means I LOVE throwing with it! 8-) Besides the heavy grog, it also has lots of RIO in it. This influences the glaze color considerably.

The glaze inside is a brown I make, the covered inside and out with Coyotes Shino. It was dipped with the handle side down, and up to slightly beyond the middle. Allowed to dry, then the procedure was the same on the other side. So, in the middle, we have a double layer of shino, single layers on the ends.

the same as above is true for this soup bowl. 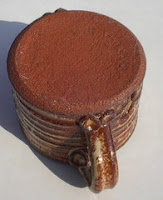 I wanted to show the coarse nature of Dixon Clay on a fired piece. Also, a rubber kidney was drawn across it to help somewhat smooth it. Still, the grog does show. 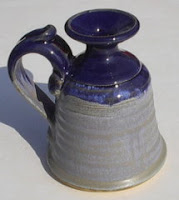 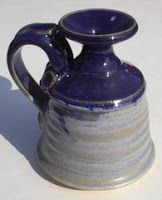 On these oil lamps, I used a blue glaze I make, and poised it off the Coyote Purple Blue glaze. I feel very satisfied with this glaze. It is very subtle, and seems to work at its best advantage on a white clay body. Any darker and the subtlety is lost. Here, the gold blush comes through nicely, as does the purple and the blue. Also, this is a single dip. Any more and there is the danger of it running. I know; I have had to grind a few pieces from that.